up next:
now reading: The Real Bottleneck for 3D Printing

The Real Bottleneck for 3D Printing

I have been reading a great deal about 3D printing being an over-hyped fad or a technology before its time. As a professional in the 3D printing business, I can elaborate on both consumer and industrial uses. Most of the articles I have read focus on consumer printers and printer companies themselves, while giving short shrift to what the machine is supposed to print. This is exactly the opposite of where our focus should be. Consumer 3D printing is 10% about the machine and 90% about the STL files.

STL (and a few other formats) is the translation between a computer aided design (CAD) program and the 3D printer. Once you learn and own a CAD program, printers are relatively cheap, and the world is yours to create.

I bought my first fused filament deposition (FFD) machine several years ago for about $1000. It prints with ABS plastic and can make many household items in about a day. You can now get a similar printer for a few hundred dollars. For industrial production, I am now considering a 3D metal printer for $1.5 million. The printing speed of that machine is somewhat better than the FFD plastic machine, but it is still slow. Until the speed of metal 3-D printers can be substantially increased, they will only be used for very expensive parts for the aerospace industry and a few others. The companies are investing a great deal of effort to increase those print speeds, but progress has been slow.

Lately, there has been some talk regarding 3D printers for children. At less than $300, why not buy one for your child? But what is the child supposed to print? Are these printers just toys, or will they really help a child to learn about 3D printing while creating useful objects?

No matter which printer you ultimately use, the machine is worthless without an STL file. If you cannot create your own, you can download an STL file directly from a few sites, such as Thingiverse. Go to that site and you will see that 99% of the items are slight variations of a few themes: D&D board game characters, iPhone cases, and what most people might call "junk." There are a few useful items, such as replacement parts, inventive devices, cute craft items, and even, no surprise, bizarre things such as this.

You might also use a scanning device, which can create an STL file from any object. You usually set the object you want to copy on a rotating platform. The device spins the platform while viewing it from the side and eventually creates a file with four sides, but no top or bottom. You then put the object on its side, rescan it, and hope you can get everything to line up correctly to give you a reasonable facsimile of an STL file. (These devices are getting better, and some are now hand-held for better coverage of the object's top side.) Of course, anything hidden or internal to the object is lost. If you want to print the file, you will have a choice of making it solid or a shell, but if you want the internal structure to be anything else, or to change any dimensions, you will have to modify your STL file with CAD. 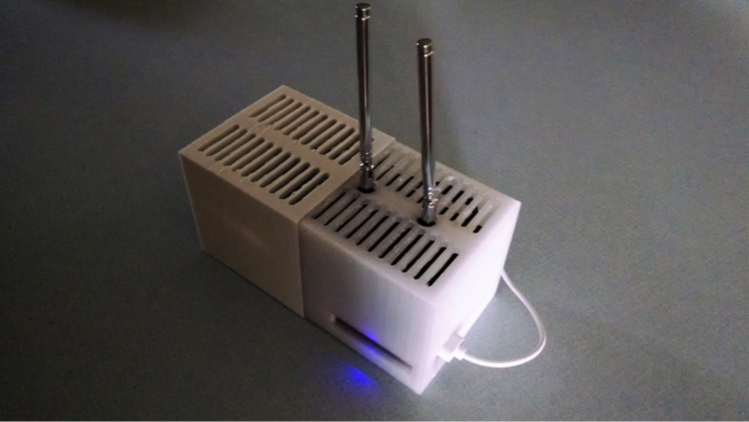 This is an example of something I designed in CAD, then printed on my least expensive printer. The box contains a do-it-yourself ADS-B In, for aviation, built by a friend. The design of the box took me about 30 minutes and cost about $3 in materials. The electronics inside the box cost about $100. A similar ADS-B normally sells for $550-$900.

The economic question of import is: If you are not printing something that is unique, why not just buy it off the internet? There are already sites that print and ship parts designed by somebody else, and others that connect people who have files to print with 3D printer owners/operators. I joined makexyz several months ago, and even though I have an expensive, specialized printer, I have yet to have anyone request a print. This is most likely because few people have STL files to print, and if they do, they already own a printer.

What this implies is tha CAD files will be the bottleneck for consumer 3D printing for some time. But most in the media focus on the printers, I suppose because hardware is easier to visualize and write about. The next breakthrough in 3D printing will be in creating a CAD program that people without engineering degrees can use without much trouble.

Then the world will be theirs to create.

Matt Person is a retired military pilot with an MS in Mechanical Engineering who is now busy as an entrepreneur seeking venture capital to develop his rotary engine patents.